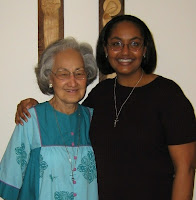 My concern has always been for the people who are victimized, unable to speak for themselves and who need outside help.
Joan Baez
The picture here was taken at the closing dinner of the Marianist Sisters' Province Assembly in the 2007. It is one of my favorites... the oldest American Marianist Sister, Sr. Laola Hironaka, with me, the youngest American Marianist Sister.
On Friday evening, Jan. 17, Sr. Laola passed away peacefully after suffering a short, but aggressive illness. She was 83 years old.
What can I say about this amazing woman? For one, she loved life. She had a certain joie de vivre. She loved to dance (who else can hula in their 80s??)... she loved to laugh... she liked long conversations with friends and sharing stories. She enjoyed meeting people who were different from herself and really taking an interest in their lives. In other words, she never met a stranger. Everywhere she went she would engage people she had never met in conversations about their lives, their hopes, struggles, joys and families. She loved people....
This love for people was clearly seen in her tireless work for peace and justice. While doing graduate studies at UC Berkeley, she got involved with Amnesty International in its first years. She wrote letters and started petitions on behalf of prisoners of war and those imprisoned unjustly. She became what's called a country specialist - studying the justice issues of a particular country to raise awareness and to help people get involved in ending the injustice. This continued from her time at Berkeley until pretty recently. She also was involved in the fight to end human trafficking (www.humantrafficking.org).
Although Sr. Laola was one of the most intelligent people I knew (she was brilliant, really) her "fight" against injustice was not a solely intellectual pursuit for her. For instance, in the aftermath of Hurricane Katrina when hundreds of evacuees where sheltered in San Antonio, she visited them daily... listening to stories, bringing a pair of shoes to one woman who asked, playing with children, praying with people... just being present to them. She always said that she wished she could do more...
She lived with a joy that was rooted in her deep faith in God. That is where she found the energy (and believe me, she had energy) and the desire to do what she did. I would be tempted to say that she was saintly. However, I can hear her now saying, "Saintly?! Why would I want that boring life?!" Did I mention her sense of humor?
She had a love for beauty in all its manifestations... from wildflowers she'd pick on her walks, to the ocean beaches in her beloved home of Hawai'i... from cool breezes to the sunsets she and I would watch from the driveway of our home in San Antonio... She had the kind of vision that could truly enjoy what was good in gratitude and humility.
I started this blog with a quote from one of her favorite artist... and someone with whom she had a relationship because of her time at Berkeley. Another fascinating thing about our dear Laola was the fact that she had connections in the music industry that I could never quite figure out. Why would Bono call our house to chat with her? Or how could she talk about Joan Baez as if she was one of our neighbors? By the way, a few days after the Bono phone call she says to me, "Oh, do you know him?" ... She was completely unfazed by celebrity. For her people were just people... all deserving respect... whether they be famous or homeless. It didn't matter to her. That was the beauty of her spirit.
I could go on and on. I learned a lot from her and enjoyed living with her immensely. I'll end with one of her favorite passages from Scripture...
Deep is calling on deep, in the roar of waters: your torrents and all your waves swept over me. ~ Psalm 42 (Monday Week II of the Psalter, morning prayer)
Many blessings to all who read this... Sr. Laola, pray for us
Sr. N
To read her obituary follow this link: http://www.legacy.com/sanantonio/Obituaries.asp?Page=Lifestory&Personld=123011598
Posted by Sr.Nicole Trahan at 9:01 AM

Thank you for the lovely reflection on Sr. Laola!

I'm sorry for your loss. She sounds like a wonderful woman.

Thank you for sharing with us about Sister Laola's life and her special place in yours. Be assured that she will remain with you and make her loving presence known to you. Just be on the listen for her!

Thank you for the lovely, heartfelt, and moving tribute to Sr Laola Hironaka. Please email me a working link to Sr Laola's obituary since I am unable to find the obit and download it for AIUSA's Archives.

Also, Sister. as I am a member of AIUSA involved with preservation for the organization, I wonder if you can point me to whom I might speak about having Sr. Laola's materials regarding her work on the AIUSA Board of Directors and local human rights work with AIUSA deposited at Columbia University's Center for Human Rights Documentation and Research which houses the AIUSA Archives?